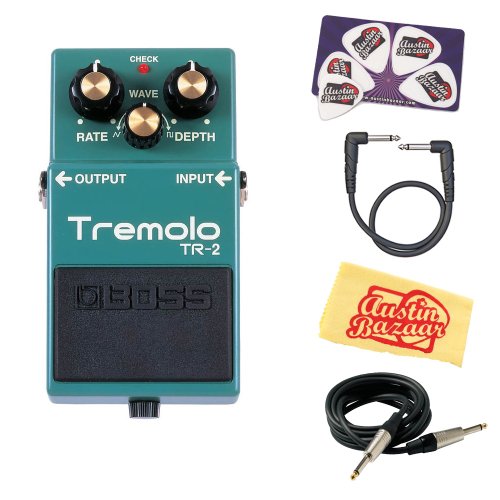 Here’s a brief overview of each pedal we’ll cover in this article – stay tuned for the in-depth reviews right after this:

Chop that signal! Make it tremble, make it wobble, as if it was suddenly dragged through a black hole along unimaginable quantities and qualities of star dust, detritus, and toxic gas.

Well, that’s perhaps the most exaggerate and edgy form of tremolo. A good tremolo pedal for guitar may be able to produce this effect, along with many others, such as soothing guitar textures, or a spacey near-reverb that sounds like the dream of a koala.

Almost needless to say if you’re here, but Tremolo is a fascinating effect. For guitarists, it usually means the use of an electronic effect to rapidly turn the volume of a signal up and down, creating that trembling effect that gives it its name.

That term goes back to the word “tremolando!”, which is Italian for “trembling”, a term that has been used from as early as 1617 to describe a natural effect produced when the players of bowed string instruments would move the bow back and forth, kind of like picking to produce the rapid repetition of a single note.

Of course, we’re here to discuss the former term, which are guitar pedals! If you’re looking to add some of that shuddering effect to your guitar playing, or even bass, here are the top pedals we recommend.

These babies and boys are here mainly for their sound quality, durability, and brand reputation, but we’ve also considered pedals that are fairly easy to find online, regardless of which country you’re in, and that at an average price of $150 USD, certainly won’t break the bank.

Let us move on the an in-depth review of each tremolo pedal for guitar:

Our Top Choices for Best Tremolo Pedal in 2021 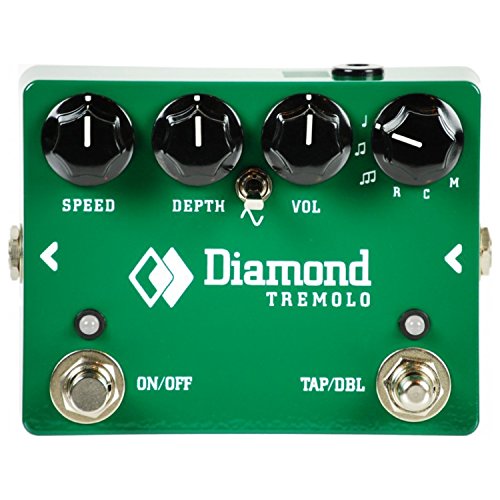 If you’re like really serious about Tremolo, this is the really nice one, and probably the most complete, but that’s also why it’s the priciest.

Diamond is a small Canadian manufacturer that aims to put sonic excellence on top of everything. They’re nearly boutique pedals and every item they put out is a rigorously crafted piece of machinery.

The Diamond Tremolo is pretty much everything you’d expect from a Tremolo pedal. It’s got a speed knob, depth (which also determines how harsh the effect is), volume knob (great to avoid those famous volume drops), and– something no other pedal has on this list– a knob that lets you choose a bunch of different timing accents, creating rhythmic tremolo effects that you will not find in any other pedal. 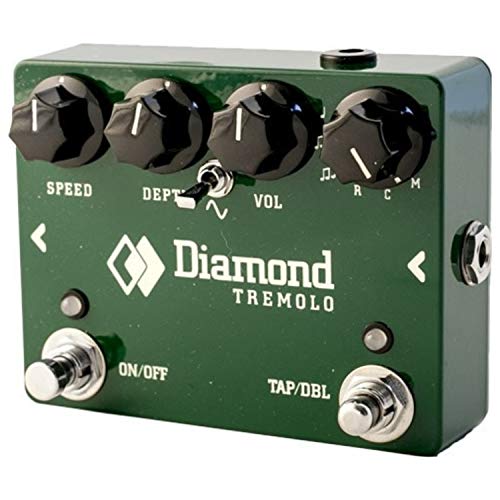 If that wasn’t enough, it also has a tap tempo footswitch, that can also be used to engage the “double speed mode”, just a way of switching to super fast tremolo at the tap of a foot.

You can tell that a great deal of work went into making this pedal, so it should come as no surprise that it sits on the pedalboards of artists like Ed O’Brien from Radiohead, and Tycho.

Now, perhaps it’s because the Diamond is a newer pedal and it has some catching up to do, but when it comes to tremolo guitar pedals that are used by professionals, the list for this one is just mind-blowing.

It’s amazing that such a classic piece of machinery can go for $99, or even $70 bucks if found used and in good condition.

This vintage tremolo effect is probably that popular due to its ease in functionality. You get 3 super straightforward knobs. Just the rate one (how fast the chopping goes), depth, and two forms of waves, with the choice to find a sweet spot in between.

The one on the left is a triangle wave, which means that the lowering and upping of volume is gradual, making the chopping effect much more subtle (which is actually why Juan Alderete prefers the PN-2). The second wave is squared, so that makes the chopping effect much more harsh, since the lowering of the volume occurs all within a harsh millisecond.

Playing around with these 3 knobs is super easy, and super fun, so even if you have to maneuver to the settings you want in the next part of the song while playing live, this little green guy makes it hassle-free.

The only complaint people have about this one (and I can vouch by that) is that it does produce a bit of a volume drop when triggered. Now, the seasoned guitarists with a trick or two under his sleeve in terms of pedals will probably have some way of boosting the sound when engaging this thing. That might explain while, even with the volume drop ‘issue’, so many players cherish wouldn’t trade the TR-2 for any other tremolo. 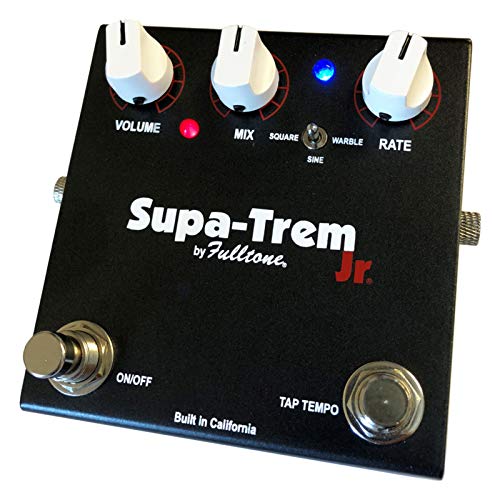 Going into another boutique and very versatile option, the guys at Fulltone nailed it with this one by adding a mini-volume knob right next to the two big knobs.

Players have found that since the volume knob actually features a 15 dB boost, you can turn the two big knobs (“Speed” and “Mix”) all the way down and use this as a straight-up boost pedal.

Further, it features a hard/soft footswitch which lets you choose between a sine-wave or a square-wave for a machine-gun like stutter.

Finally, a cool thing about the Supa-Trem is that it uses a photocell, which is a piece of technology that old tube amps used to use, so it claims to add no noise at all, while providing a very clean, crisp and analogue tone.

The potential downside with this one is that it doesn’t feature a tap/tempo button, and it’s a bit hard to know where to set the “Speed” knob right to the setting you like. Some guitarists mention that you can set the “speed” and “mix” knobs with your foot, but how accurate can that be?

A very cool feature, however, is that the red LED light lets you see the speed of the tremolo effect at all times, even if the pedal is bypassed, so you can sort of make sure it’s the right speed before engaging the pedal.

Finally, here’s the list of pros that use the ST-1. It includes names like Joe Bonamassa, Jonathan Wilson, and Justin Vernon. 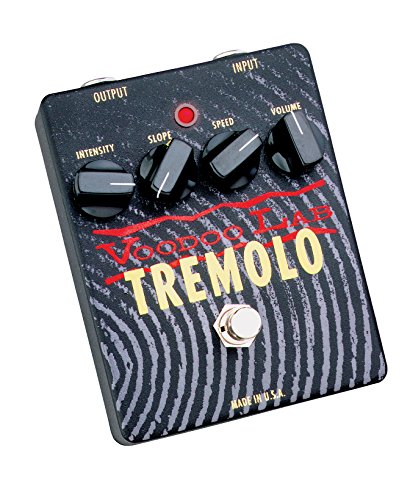 And to finish up, we got a tremolo pedal by American manufacturer Voodoo Lab. This one also includes a photocell tremolo circuit, and pretty straightforward controls.

You get an “intensity” knob, which is similar to “depth”, a “slope” which lets you alter the waveform (though it be cool it it included an actual drawing of which waves are at each end), the mandatory “speed” knob, and (good to soothe any volume drop paranoia) a good ol’ “volume” knob.

The aim with this one was to re-create the tone of a vintage tube amp tremolo, so it might be a good bet for thee if you fell in love with tremolo not because of the harsh helicopter-like effects we’ve discussed before, but for the dreamy and seductive tone of the tremolo some amps used to feature.

Considering that, it’s a pretty straightforward, nostalgic sort of tremolo. Probably not as versatile as the other pedals on this list, but sometimes nostalgia is exactly what you need for certain tones or styles of music.

Also, you can always tweak it within your effect chain, so the pedal is really as versatile as you want it to be. Example? The VL Tremolo sits with guitarists like Jack White, Dean Fertita from Queens Of The Stone Age, and Devin Townsend.

Bottom line? It’s got a sound all its own and that’s respectable in any stomp box. The only thing I’m not a fan of is the design. I understand those grey lines over the black case are supposed to be waves, but to me it looks like a big footprint.

Now, having gone into detail with each model, let’s take a look at some questions you might have regarding tremolo pedals:

Short answer? Anything you want! Just plug it to your guitar and amp, play around with the settings, then combine it with other effects, knock yourself out!

A more educated answer would be that tremolo is typically used to give an additional amount of texture to guitars or keyboards, or even vocals, that is simply hard or downright impossible to replicate with natural playing.

You would need somebody to stand next to your amp and mute and unmute it repeatedly to even come close, and that person would need to have perfect timing, before the mute switch in your amp is eventually ruined, of course.

So tremolo is a great way of achieving that effect of chopping up the signal, whether it’s ultra harsh, as in, complete silence between each wave or just a more subtle up and down.

In this regard, most tremolo pedals will have some sort of “rate” setting, which is the speed of the effect, and a some way of controlling the wave shape, which will alter how harsh the chopping is.

Can’t I get tremolo from an amp? Or a multi-effects processor?

Some amps, especially vintage ones, might already include a tremolo effect. Do note that these will usually be ultra simple and, when using them, you don’t get to enjoy the convenience of having a little box unit to control the effect right at your disposal, near your feet.

Also, most multi-effects processors will include a tremolo effect. While these will vary a lot depending on the manufacturer and product model, you have to consider that what you’re getting in those instances is a digital version of tremolo, as opposed to analogue circuitry, which gives you that vintage-vibe, especially with the Diamond Head and Boss pedals on this list.

It’s also very common to feel that hitting the tremolo effect while you play results in a volume drop. While most multi-effects processors will have little or no ways to help you find some source of extra gain that can be triggered at the same time you engage the tremolo, some of the pedals we’ll see do feature a way of dealing with this. Namely, their own friggin’ volume knob.

What are some tremolo use examples?

One of my favorite examples, though performed on bass, is this video by Juan Alderete from The Mars Volta, using a PN-2 from BOSS (they don’t make em’ anymore), distortion, compression and some other effects to achieve an insane helicopter sort of sound.

Other good examples include “Bones” by Radiohead, “Gimme Shelter” by good ol’ Mick and Keith, and some guitar subtleties on “Child” by The Maccabees.

Just some clear examples. Blues and country artists do use this effect a lot, so you can probably name more.

You got your pedal, now where do you put it?

Anyway, let’s say you went with one of these babies, now where does a tremolo pedal go in terms of an effect chain?

Since the effect is quite subtle and sometimes, depending on your intention, you want it to really chop up the signal, the best bet is to put the tremolo at the very end of a chain, at least after your more notorious effects like distorsion, pitch-shifters, or compression.